Where will you be when the sound of the horn signals the end of his time in his home arena, when the college basketball world pauses, when our minds turn towards recognizing what has happened? Will you be sad to see him go, or will you be happy that he was here? When you look ahead to March 5, 2022, at the conclusion of the latest installment of the storied North Carolina and Duke rivalry on the hardwoods, how do you think you will react to Mike Krzyzewski walking off the court, his court, for the very last time?

Before I fast forward, I rewind to the first time I attended a game in Cameron Indoor Stadium. I was a freshman basketball manager for East Carolina. On December 3, 1986, when the Pirates came calling, my assignment for the game was to operate the coaches’ camera from the infamous crow’s nest. It was a different time. Cameron Crazies lobbed tennis balls back and forth to one another, from section 17 to section 19, over the heads of the Pirates who ran layup lines on the south end before the game started. I was 18 years old, and I was in heaven.

On that night, it was my first time looking on as Coach K shook hands with his opposing coach before the national anthem. Charlie Harrison was on the other sideline leading those clad in purple and gold, and from my perch high above the floor, my eyes were transfixed on a coach that was beginning his seventh season as the head coach of the Duke Blue Devils. His roster was stocked with the names of Danny Ferry, Tommy Amaker, Alaa Abdelnaby, and Quin Snyder. Those faces and their jerseys I had only seen on television. For a moment in time, I got to watch them live, in person, for forty minutes. 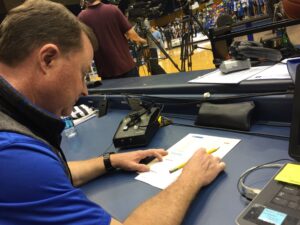 The last time I will be in Cameron to watch Coach K shake the hand of his opposing coach will be on March 5, 2022, when, at just about three and half minutes remaining on the pregame clock, Mike Krzyzewski will emerge from the doorway in the northwest corner of the lower bowl of the stadium. He will pass by the first responders stationed in the shadows before emerging under the bright lights.  That is when the Crazies will signal his arrival. He’ll move down the north baseline, in front of the pep band and towards the North Carolina bench. It is there that he will greet Hubert Davis. As the new head coach of the Tar Heels, this will be Davis’ first head coaching experience in Cameron Indoor. After a short exchange, the “G.O.A.T.” will pass by me as I’ll be sitting at the scorer’s table, readying the microphone to wrap up my 12th year at public address for Duke basketball. He will be just over four decades removed from his first game at Cameron. I will be eons from where I was as a student in Greenville. 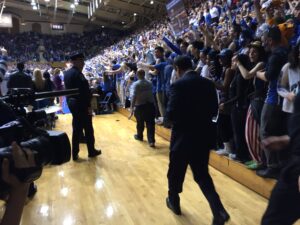 The only place where the lives of Mike Krzyzewski and Trip Durham intersect is at the midcourt stripe on Coach K Court. In the three seconds that it takes for him to stride by me, I imagine that our connection will forever remain special in this cathedral of college basketball. He has had the opportunity to guide young men through the passage of adulthood, building character and winning championships along the way. It has been my great fortune to push the button and talk about some of the greats that have spent time in that grand old building, speaking, too, of the unforgettable moments that have made Duke basketball what it has become under his leadership.

I don’t know if Coach will hear my pregame introduction when I open the microphone on March 5, 2022, to say, “The Blue Devils are led, in his forty-second season, by YOUR head coach, Mike Krzyzewski.” I am certain that 9,314 fans will hear it. There will be a roar, applause filled with pride, respect, and no doubt, delivered as a standing ovation.

There is an unspoken policy in basketball about cheering from the scorer’s table. You are simply not supposed to do it. But I have a hunch I will ignore that rule, at least during that announcement before play begins. I just might stand and join the masses as adulation is passed along to Coach. And right before tip-off, I, now just the second public address announcer in the era of Coach Mike Krzyzewski, will turn to the crow’s nest to give a wink and a wave to my younger self.

When the game is over, I will linger, with just a bit more work at hand.